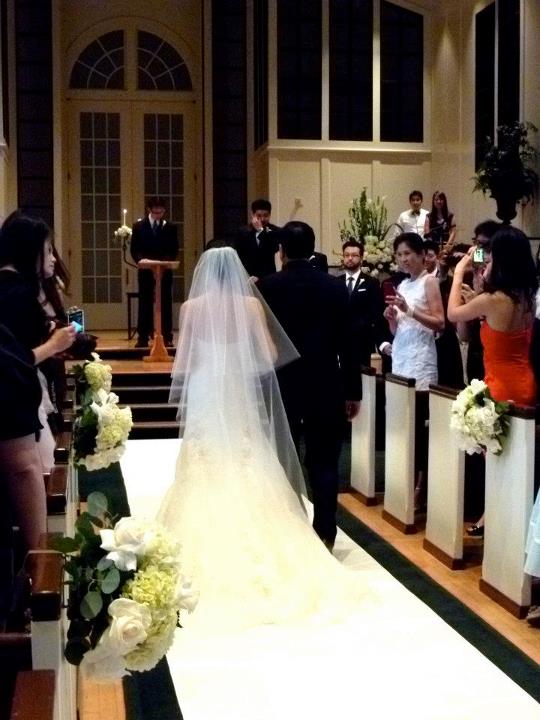 Wow; what a weekend.

I’m back in the office, still recuping from the back-to-back late evenings of rehearsal dinner, followed by wedding + reception, followed by church the following Sunday morning. I slept in until Tuesday.

But as I look back there was something very tender about the whole weekend. Mind you, June & Jennie are not only my first couple to marry in Houston, but also the first couple (along with another) to receive pre-marital counseling from us. They are my first everything, for both Ash & I, so they hold a very tender place in our hearts. On a side note, it was humorous that a few people asked, “how many weddings have you done before” to which I responded “more than 1 and less than 100” — did my neophyte-ness show thru that much? ;)

So I take a few moments to reflect back on this whole first-time process for me – and of course, my friends June & Jennie.

Premarital counseling: I dug around, consulting several resources to compile my own pre-marital material. It was a crazy-busy time. I had to balance the different sources I had; some were too heavy on the gender-roles side, others were too practical. Some were way too mystical and theoretical. So I had to wrestle through and ended up crafting my own material, a happy balance between all of the above, with Trinitarian foundations (Chapter Titles: 1. IN IT TOGETHER, 2. EMBRACING OTHERNESS, 3. GROWING THROUGH DIFFERENCE, 4. UNITY IN DIFFERENCE). I like to think we touched over the scope of relational counseling, things like MBTI types, love languages, family-systems therapy, leaving-to-cleaving, intimacy, and other stuff. We had some really good talks those evenings…

Wedding officiating preparation: I worked on this well in advance and had to dust off my old “wedding” file, asking, “how did this go again?” referring to the one other wedding I officiated as well as my own. I tweaked things, to place an emphasis on wedding ceremony as family therapy, and on this I am greatly influenced by Edwin Friedman’s ideas in Generation to Generation, about how family ceremonies are some of the most pivotal opportunities to counsel an entire system. Still I had to tread carefully as I discovered that Western notions of individuation were coming head-to-head with Eastern worldviews of collectivity. So I diplomatically wove my way through crafting a ceremony that would bless the entire Chon / Kim clan, signifying departures but also new beginnings of evolving family systems. And when we actually went through it the day of, tears abounded. It was good. God showed up.

Homily preparation: It just made sense for me to do Ruth. Now it was my turn to cry. As I sat in Panera bread working on my wedding homily, just a few seats from where I am now, I found myself getting drawn into my own talk. Feeling deeply stirred. And every now and then I had to turn aside and cry a little. Trust me, I’m not the sentimental type. I weed out corny like a crow in a field. But this was different; reflecting on the gritty determination of Ruth’s vows to Naomi, I saw a picture of utter determination, almost blind in its impulse; c’est l’ amour, no? Isn’t love risk? Determination to stay together as embodied by our wedding vows? Nothing takes the place of experience when it comes to understanding marriage. But in the meantime, I think our vows are good place holders.

The big day. If you didn’t notice, after the service my stomach was in knots. All the tension built up. It took a while to come off that high. But during the ceremony it was smooth. I wanted to officiate well for these guys, I wanted the service to be good for them and their families. I think it went well. Everyone seemed to be weeping for some reason. Mom, Pop, Groom, Bride, bridesmaids, people in the audience. Somewhere something I said about the “permanence of the act” made this beautiful couple in front of me choke up.

Now as I process this crazy, wonderful weekend of firsts – yes I think that captures it… God showed up.

2 thoughts on “My First Wedding in Houston”